by shwetaPosted onMarch 17, 2012
The most common type of instruction in a program is the statement. A statement in C++ is the smallest independent unit in the language. In human language, it is analogous to a sentence. We write sentences in order to convey an idea. In C++, we write statements in order to convey to the compiler that we want to perform a task. Statements in C++ are terminated by a semicolon.
// my first program in C++#include
int main ()
{
cout << “Hello World!”;
return 0;
} 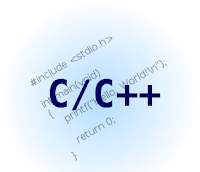 The first panel (in light blue) shows the source code for our first program. The second one (in light gray) shows the result of the program once compiled and executed. To the left, the grey numbers represent the line numbers – these are not part of the program, and are shown here merely for informational purposes.

The way to edit and compile a program depends on the compiler you are using. Depending on whether it has a Development Interface or not and on its version. Consult the compilers section and the manual or help included with your compiler if you have doubts on how to compile a C++ console program.

The previous program is the typical program that programmer apprentices write for the first time, and its result is the printing on screen of the “Hello World!” sentence. It is one of the simplest programs that can be written in C++, but it already contains the fundamental components that every C++ program has.

View all posts by shweta